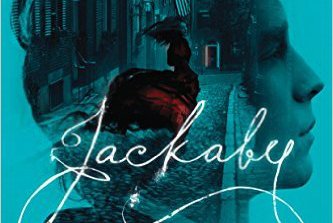 If you like Sherlock Holmes with a little Paranormal Activity, this is the book for you.

Jackaby is a fun, fast read. One of the great things about this book is how fast the plot pace is. You are not overwhelmed with too much story-line, but you are hooked from start to finish. I personally had not expected much from the book, aside of the fact that the cover is amazing. That alone would give anyone reason to read this book. Though the story is great, I did expect it to have more . . . “umph”, I guess. It was a great read, fast and fun, but nothing more.

Jackaby is told from the perspective of a young woman, named Abigail Rook. She is seeking a new life for herself, and upon arriving at her destination, Abigail is introduced to a very strange man. Right away, anyone would know this man will play a major role in the story. Later, when Abigail is seeking employment, she comes upon an advert and immediately goes to see what would required of her. Oddly enough, the gentleman she had met prior to this day had been the very one seeking assistance.

At first, Jackaby does not see Abigail fit for the job, though there is something quite astounding to the fact that she is young woman who should not be in his line of work. Abigail does not quite know what to make of this Jackaby, seeing he appears as normal as all the other detectives she has heard about. However, she does know that there is something different about him.

Abigail finds herself learning that the world is not as she knows it. Monsters lurk in the darkness; a banshee sings her final song, and everyone hears it. A man murdered in the safety of his own apartment, and claw marks scrape the windows and doorways. And a handsome, young policeman has a secret of his own, yet he cannot seem to take his eyes off Abigail.

I found Chapter 13 to be the most interesting. Strange thing to say, since there is no Chapter 13 at all. I assure you that I was just as shocked as Abigail when Jackaby specifically asks that the content be destroyed. Needless to say, the detective tore the pages out of the typewriter to make his point. Leaving dear Abigail the task of merely letting the readers know that even she does not understand the odd detective’s ways of business.

A cat-like monster captured and killed. The handsome, young dog-like man is wounded and sent away to protect his identity, leaving dear Abigail wishing he could return. You would think she would not want anything to do with such a creature, but I suppose she could only see the good in him. He truly is a good man. He has more control over his ability than one might think. And he has almost hidden sentiments, mirroring Abigail’s feelings.

Overall, this is a great, quick read; fun to read, even if you are not completely into the paranormal world. Like me.