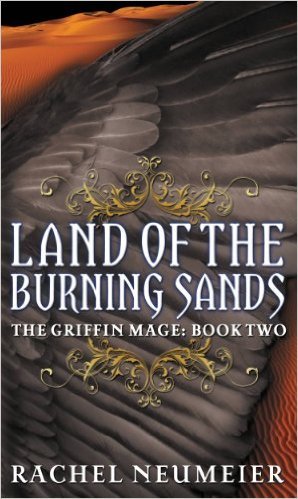 A solid second read to a promising trilogy . . .

Book 2, Land of the Burning Sands, deals with what binds a man’s soul, or a woman’s, in extremity. In the moral war, what will take a man beyond his limits? Beyond the limits he sees—and into the realm of sacrifice? Expedience, command, force, or love alone?

Law-bound to the geas by an accidental murder and one committed in the heat of rage, young Gereint flees a horrible master, the latest and worst. The geas rings bind him to the command of whoever holds them. Risking death in Melentser when the griffins take the city and return it to the fiery desert their kind lives in, Gerient stays behind when his master flees and sets out for the north, where the geas will break. Gerient falls to the forceful sun of the griffin’s desert, and wakes outside the fierce sands in a stranger’s camp. Besides holding his geas, Eben Amnachudran begins to bind Gerient’s heart in ways Gerient has never known. With kindness and lack of temper when pushed.

Gereint binds the geas about himself to deliver Amnachudran to his house when he falls to accident in a river crossing. A judge and healer, his wife a stronger healer yet, Amnachudran brings Gerient back to the living in more ways than one. Removing the brand from Gereint’s face that marks him a geas slave, he sends Gereint to a surgeon in the city who can remove the geas rings, an unlawful act; and to his daughter, Tehre, a builder with magic.

Waiting in Tehre Amnachudran’s house for the surgeon to return to the city is not unpleasant. Gereint enjoys the company of the Lady Tehre, whose mind is sharp and eager; as long as building bridges or the tension of materials is in question, and one does not press her to stand on protocol or to act the unthinking lady. Then an enemy neither of them expected reveals himself in the heart of Tehre’s house, and Gerient orders Tehre to bind him by the geas to save them both.

When their enemy is dead, another man takes Gerient’s geas, one with the law behind him, and mayhap more. A strange, small man with white hair, he tests Gereint’s new loyalties to Amnachudran and Tehre and Gereint’s own self, invading heart and mind beyond bearing. The man, Beguchren Teshricten, the Casmantium king’s coldmage, pushes Gereint to things he never imagined. Things involving old enemies and new alliances between the kingdoms of griffin and Casmantium and Fierabiand. If peace is not sealed between them, there may be nothing left to rule.

“So you came here,”Gereint said quietly. “You alone. Except for me.”

Beguchren moved his shoulders, not quite a shrug. “I would do anything to redeem our mistake.” He glanced up, meeting Gereint’s eyes. “I would certainly sacrifice one maker. One skilled, strongly gifted maker; the sort of maker who already has a thread of magecraft running unrecognized through his mind and soul and gift. That sort of maker might do for me what must be done.” He paused. Then he went on, deliberately, “It was not your mistake, Gereint. But I am compelled to ask you to help me repair it.”

Gereint met his eyes. “But you can’t force me to help you,” he said. It was not quite a question.

Beguchren bowed his head again. “If the geas, if any part of magecraft, could force you to answer my need, I would use it. As it happens, nothing I know can compel you to the . . .  immolation and remaking of the self that is necessary.”

“Save voluntary self-abnegation.” Gerient tried to keep to the same deliberate tone, with how much success he could not tell.